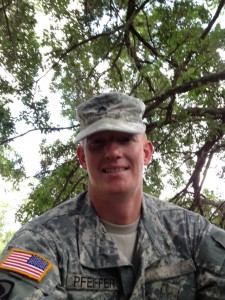 Jerry Morrison was my next-door roommate. We were both new medics straight out of Advanced Individual Training (AIT) from Fort Sam, Houston, TX. We arrived and were assigned to a provisional medical company, and we then transferred to HHT 2/11th ACR. We were given barracks rooms that adjoined each other with a bathroom that we shared. He was a young kid from Chicago with Jamaican heritage, and I was a young kid from Tampa, FL.

As medics we were responsible for the care and treatment of service members under the direction of a physician’s assistant. The units we supplied the help for, the opposing forces—known as the OPFOR which were the “bad guys” to the units that came to train—frequently changed locations, known as logger sites. We’d stay in a site out there in the Mojave Desert for a couple days before having to move during the training rotations. We provided medical treatment to the troops.

On October 9th, 1994, Jerry was heading out to provide medical coverage driving a M997 ambulance. It was really dusty, and he struck another truck, I believe a M35 cargo truck. The front bumper of the cargo truck pushed the steering wheel into his chest. Jerry was alive during the air evac, but he died when he got to the hospital from the helicopter. We all met outside and learned that he’d passed. The next day at work senior leadership came by and said the best thing for us to do was to focus on the job and keep working.

About a week later, another medic and I were eating our MREs together at a logger site. I kept thinking about how close we were to the spot where the training accident happened, that one of my friends had died close by. I remember the food didn’t taste like anything, and how desolate it was in the desert at that time. Jerry’s nickname was the Joker. After he died, some other guys and I had gone to see his crashed ambulance at the base scrap yard. I found a Styrofoam cup he’d had drawn on in the wreckage with his nickname etched in. I kept it for some time.