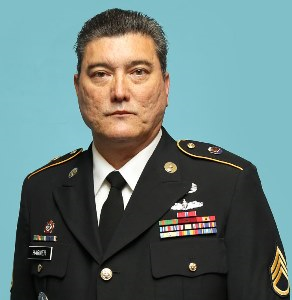 After we’d get back from a mission, we’d take out our MREs. We’d be sitting around, joking and having a good time and this guy says, “I’m going to make us something good.” So we’d all collect our MRES together and we’d open them up. We’d separate them into piles: chicken, beef, rice, potatoes, all the little pouches and stuff like that. And this cook cooked. The palace had big gas stoves, running water and everything you needed in the kitchen. He would take these different components of the MRES and he would mix them together, using the different seasonings they came with—tabasco sauce, pepper, salt, sometimes the jalapeño cheese sauce. Since we actually had a heat source, he would sauté all the chicken packages together or mix the beef packages with the vegetables.

So for about three weeks we had some very good meals made out of the MREs. We would have good, hot four or five-course meals—entrees, vegetables and potatoes or rice, depending on what he decided to make, and nobody left an empty plate. When that guy started cooking for us, making us dinners that were like you were back home, it changed everything. You weren’t eating out of a bag. You weren’t heating with a chemical water heater. We actually served it on plates with forks and knives and a glass to drink your drinks out of. It was like eating meals. It brought your sprit, everybody’s spirit, up because it brought a sense of normality back to where we were at, which was, you know, hell.