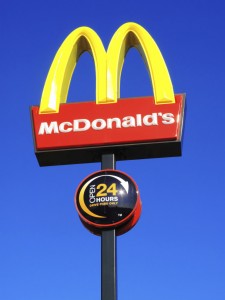 The annual McRib frenzy has begun, with elusive sightings of the ersatz baby back ribs in Michigan, Utah, North Carolina, and Massachusetts. Aficionados are wringing their hands as reports filter in of a 20% drop this year in the number of franchises carrying the item.

Lost in the hoopla, the McRib’s real origin story: as a cost-cutting measure by the US Army during the 1960s. Working with companies such as Oscar Mayer and Armour, as well as university food scientists, the Natick Soldier Systems Center’s Combat Feeding Directorate figured out a way to glue together cheaper cuts of meat to resemble steaks and chops. The technology quickly found its way into the fast food industry. In 1981, five years after soldiers ate their first “restructured” steaks in the field, the nation sank its teeth into the now iconic pork sandwich.

For more see “How Do You Want That Chunked and Formed Restructured Steak,” Combat-Ready Kitchen, pp. 117-123.